How to Obtain a Thai Hotel License in Due Course

You certainly read it in the news: Authorities are taking action against hotel owners for operating without a license.

Officials and police may at any time descend on the hotel premises to check its license status. If the hotel manager can’t provide evidence showing that the hotel has permission to operate, he is questioned at the local police station, charged with illegally running a hotel and warned that if the hotel continued with its services an arrest would be made.

Illegal hoteliers are subject to a jail sentence for up to one year and a fine of up to THB 20,000. They can also be fined THB 10,000 daily if they continue to run their business illegally. As a foreigner, the penalty might come in combination with a black-listing.

Given the current crackdown against hotel businesses without or with doubtful hotel license, it is advisable to act rather sooner than later to clean-up existing license documents or to apply for a hotel license. The same goes for serviced apartments, poshtels, guesthouses, or even bungalows by the beach which qualify under the law as a hotel.

A hotel is defined under the Hotel Act 2004 as any business providing paid accommodation for less than a month, irrespectively of the number or capacity of the rooms. Even the smallest villa and a one-bedroom condominium unit can qualify as a hotel under the law. However, the Hotel Act legitimizes ministerial regulations to regulate this otherwise.

To successfully apply for a hotel business application, in general, these seven steps are required.

Step 1: Is the business exempted under the 4-20 privilege?

An application is only needed if (i) the business qualifies as a hotel and (ii) such hotel is not license-free. Under the Ministerial Regulation 2008, a hotel license is not required if the business has not more than four rooms on all floors in all buildings, has a total service capacity of no more than twenty guests,qualifies as a small business which provides an additional source of income for the owner, andreports its daily rental business to the government (hotel registrar).

If the business is in-line with these requirements, it is unclear whether it does not qualify as a hotel (“no hotel”) or whether it is a license-free hotel business (“type-zero hotel”). The latest court decisions seem to favor the latter interpretation.

In accordance with the ministerial regulation, hotels can be classified into different types as follows:

Type 0: hotels which are exempted from certain requirements including the need to obtain a hotel business license,

Type 1: hotels providing accommodation only, the number of rooms does not exceed fifty, the size of each room is not less than eight square meters,

Type 2: hotels providing accommodation and catering or restaurant services, the size of each room is not less than eight square meters,

Type 3: hotels giving accommodation, catering or restaurant services, the size of each room is not less than 14 square meters, and which has either conference rooms or entertainment venues which under the Place of Service Act could be a place for dancing, bars, and nightclubs or spa,

Type 4: hotels providing accommodation, catering or restaurant services, conference rooms, and entertainment venues, the size of each room is not less than 14 square meters.

For Type 3 and 4 hotels, no entertainment venues will be allowed unless these hotels have more than 80 rooms, are located in entertainment areas, or serve food, alcohol or entertainment only, and have opening hours after midnight. 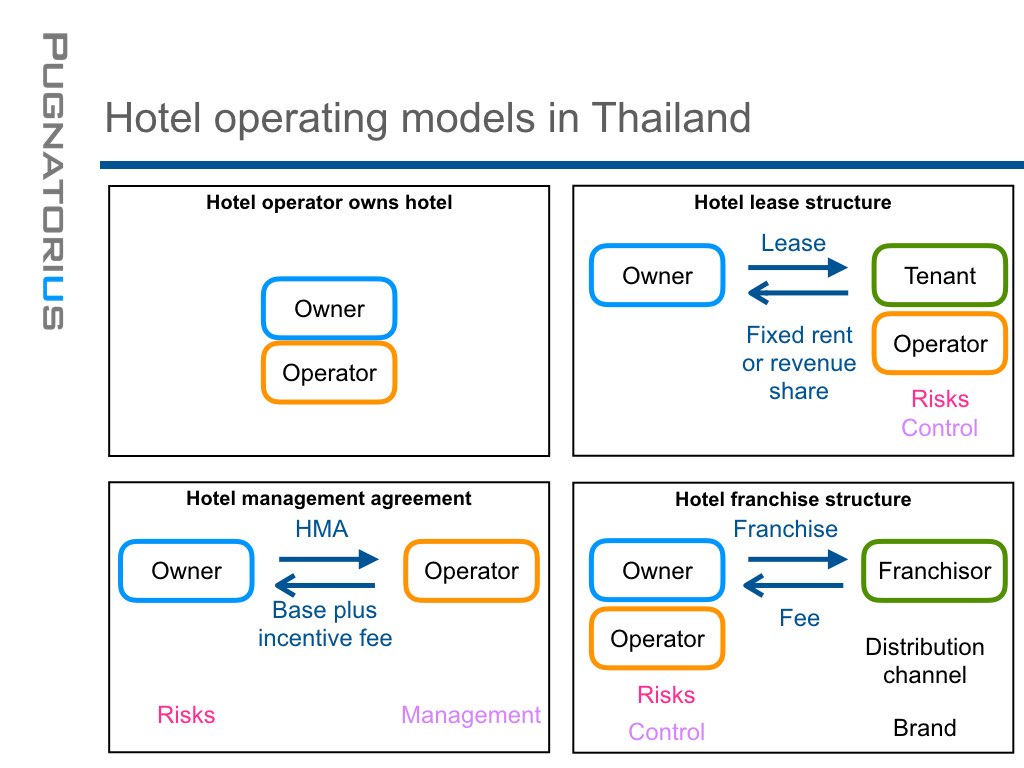 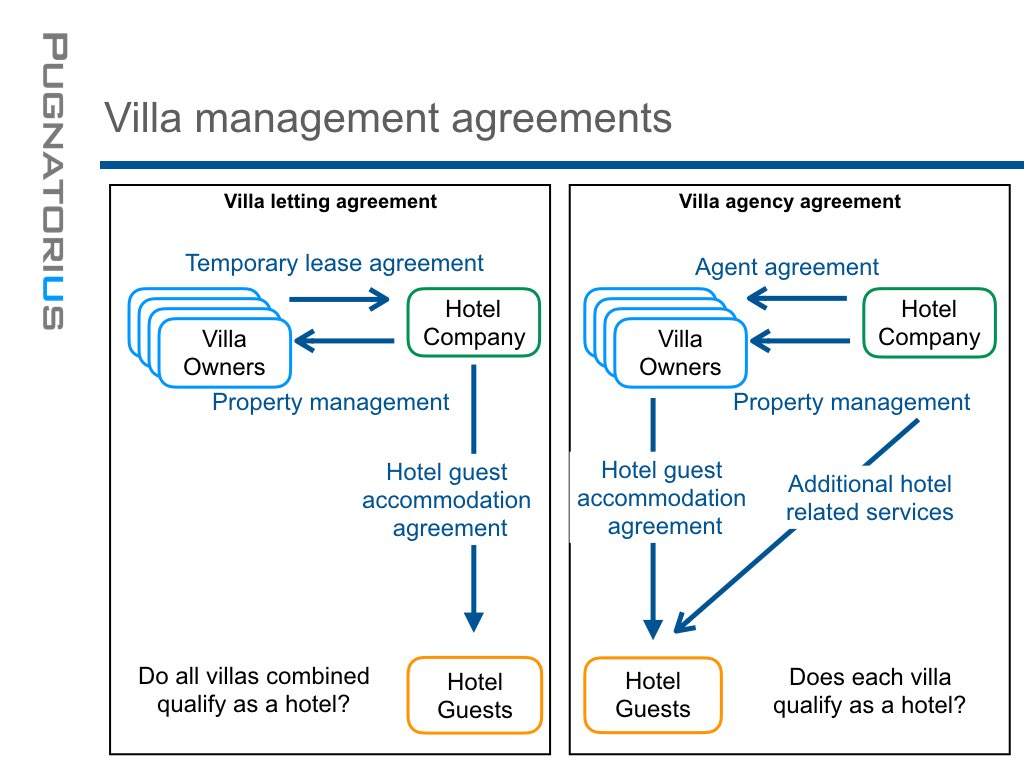 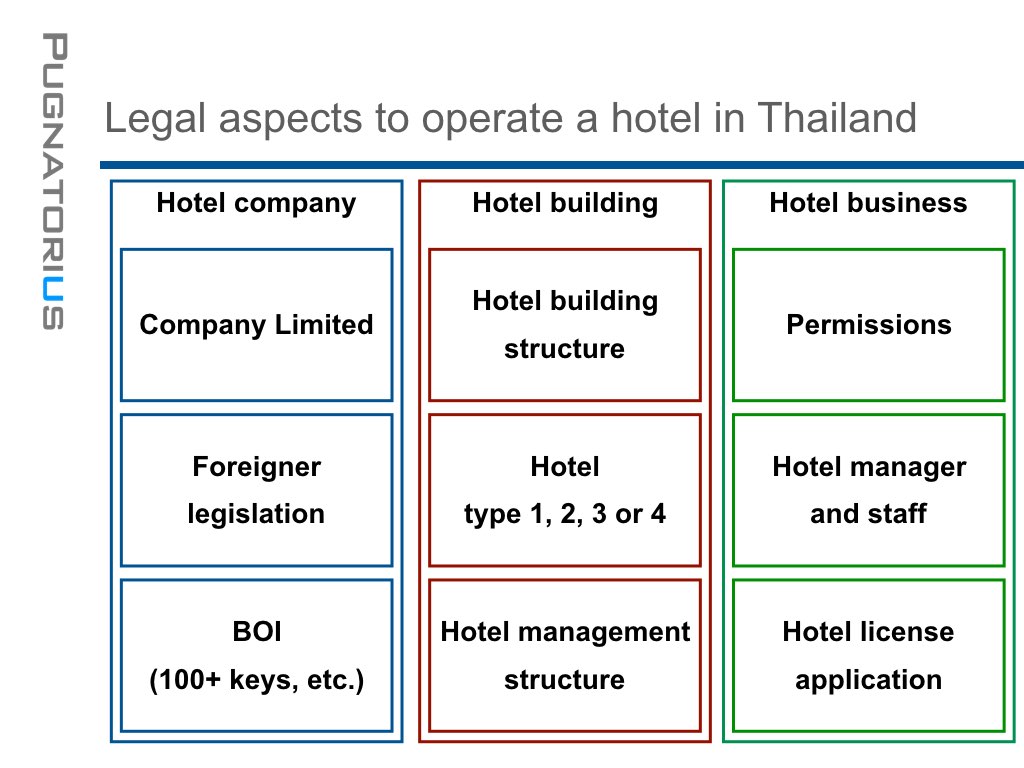 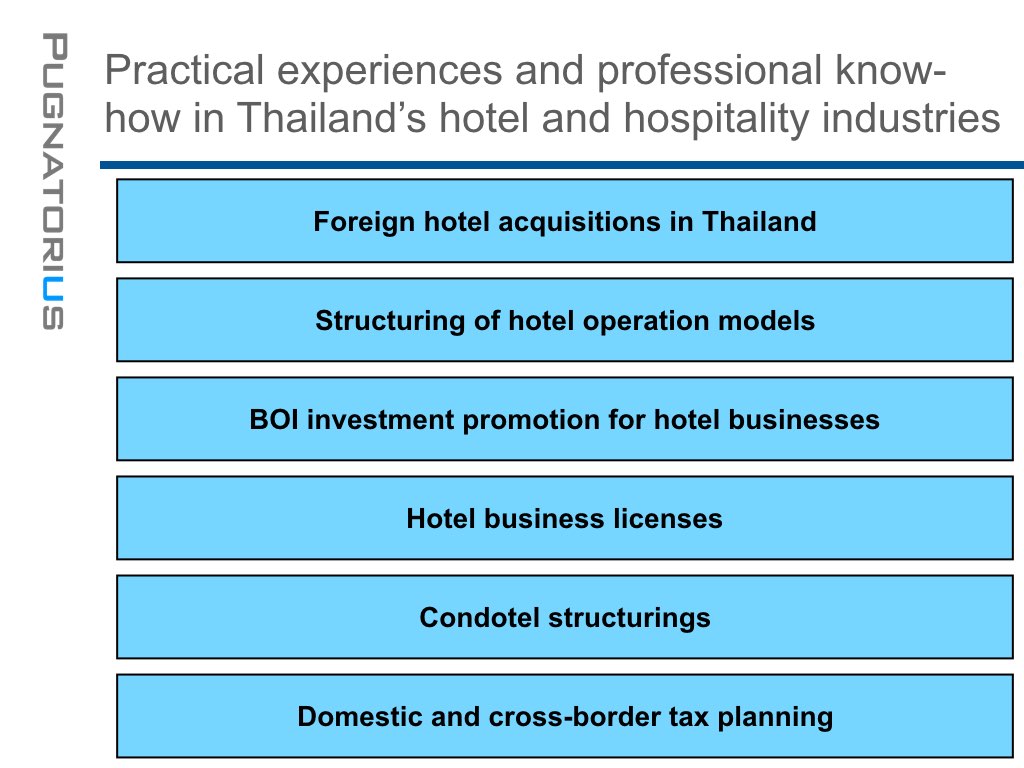 An investment promotion by the Board of Investment can be obtained under category 7.4.3 (Hotels). For this, the hotel business must have at least one hundred keys (keys means rooms) or a minimum investment (excluding the cost of land and working capital) of not less than THB 500 million. The BOI promotion requires a new investment and, therefore, an existing project is not easily eligible to be promoted.

The hotel business can be carried out by a company which is set-up under the U.S. Thai Treaty of Amity. However, such treaty company is not allowed to own the hotel premises.

Thailand’s hotel management service businesses are excluded from the restrictions of the Foreign Business Act.

The hotel building must fulfill certain safety standards depending on its number of floors. As an example: With no more than two floors and less than ten rooms, the walkway needs to be more than one meter wide and must arrange for fire extinguishers. For buildings having more than two floors, and more rooms, the sidewalk must be even wider. In buildings with more than four stories, emergency escape stairways made of fire resistant material is required. Fire extinguishers, smoke alarms, escape route signage, emergency lighting and other legal requirements have to be fulfilled as well.

For a hotel with more than 80 rooms, or depending on its size or location, an Environment Impact Assessment (EIA) is required. permit, a license from the local administration official must be obtained. If the restaurant has an area less than 200 square meters, the owner must only notify the local authorities for a Certificate of Notification as stated in Public Health Act.

There is no new “small hotel law.” However, to facilitate existing outlawed hotel businesses, a new Ministerial Regulation came into effect on August 19, 2016, which sets for an interim period of five years relaxed requirements for the reclassification of existing buildings to be used as a hotel.

To avoid an outlawed hotel, apart from the  Building Control Law, the requirements of the Urban Planning Law, the Law regarding Protection and Response of Public Hazard, Law regarding Public Health, and the Law Regarding Promotion and Maintaining the National Environment have to be taken into consideration. Also, the project has to comply with the provisions of the Ministerial Regulations regarding Hotel Business Operations.

The hotel needs proper contractual arrangements under a hotel operating model as explained in “The hotel management agreement”.

Step 6: Qualification of the hotel manager.

The hotel needs a dedicated hotel manager with appropriate education or experiences and the duties to manage the hotel affairs. This can be the same person as the hotel business operator.

Licenses can be applied for hotels, restaurant businesses, seminar room business and additional entertainment businesses with discotheque, bar, nightclub, and spa. The license has a validity of five years and can be renewed.

Additional licenses might be required with respect to food, liquor, entertainment and more.

Disclaimer: A little knowledge is a dangerous thing. This low-resolution high-level outlook constitutes neither legal advice nor an attorney-client relationship.

Owning a Vacation Rental Property as an Investment on Koh Samui